It’s been a bit of a rocky few weeks here in my corner of the world (my mum’s been in and out of hospital, which takes its toll on both of us!), and I’m conscious that I have two projects and a Wheatfields update to share with you all but…I have not got around to photographing those things yet.

On Wednesday – a beautifully bright and sunny day, perfect for out-of-doors crafting – a Young Friend and I embarked on an experiment in dyeing our own yarn!

I’ve been pondering trying this for some time. I looove hand-dyed yarn, and okay yes, I don’t actually use it a great deal, but I want to use it more, and besides that, playing with colours is fantastic fun.

To start me off on my experiment, I browsed the internet for what I knew would be available – some dye-your-own-yarn kits. I alighted on this one by Knitting Needle Lane because they’re local to me – I didn’t know about them before, but I was delighted to discover them (and delighted to find that they would hand-deliver to my postcode, too!). It contained everything I needed to have a play: acid dyes, citric acid, gloves, instructions, and five 20g mini skeins of undyed yarn.

Acid dyes, I have discovered, means the dye uses acid (plus heat) as a fixative. Thus citric acid (the internet tells me vinegar is also useable, but eurgh, smell!). I’m sure many of you knew this already, but it’s definitely been interesting to google different kinds of dyes and fixatives and methods for ‘setting’ the colour into the yarn (microwave, steamer, hob, etc).

So I asked Young Friend if she’d like to come and have a play with me. She’s the eldest daughter of one of our carers, and she’s been diligently watering the pots in the garden for the last three years or so, in the spring and summer. She’s a creative type, and I thought it would be fun for us both – and, for her, a rather welcome chance to escape from being at home with three siblings! Since we did it in the garden, it was safe enough in terms of coronavirus – we weren’t too close to each other at any point 🙂

She said yes, so at that point I sourced another couple of skeins of yarn – two 100g skeins, so we could each have one of those and two or three mini skeins (I planned to let Young Friend have the third of the five mini skeins, but she let me have it instead). The dye kit said there would be plenty of dye for more than the mini skeins – and indeed I have plenty left over, and am now trying to decide whether to buy more mini skeins or more fullsize skeins to have more dyeing fun with.

Because oh my gosh, it was so much fun 😀

The instruction booklet was really clear and full of tips and advice. I pre-soaked the yarn for at least an hour as instructed, then carefully squeezed out excess water. We made up the dyes – red, blue and yellow – and then I made a green and Young Friend made a purple, and we started playing.

We decided to stick to the same/similar colours for each of our sets of yarn. That way, I reasoned, I could use all the yarn in one project. The colour pooling/striping would be different, but the colours would blend nicely. She wanted purple and pink, and I went for blue and green. We used forks and scoops, dashing colours onto the yarn, making dots and stripes and all sorts of things 😀

For setting the dye, I went with the microwave method, which entailed wrapping the wet, dyed hank of yarn in cling film and microwaving it for a few minutes. I think if/when I do more, I’m going to try an alternative method that I’ve seen somewhere about on the internet – using a glass or plastic microwaveable bowl, and cling-filming over the top (and re-using that cling film multiple times), or even using something like a shower cap to cover it. I just don’t like the idea of using up that much cling film for something like this – it’s environmentally wasteful. We can recycle cling film in our area, but even so.

Then we carefully rinsed it out, as instructed, in cold water, and hung the skeins to dry. 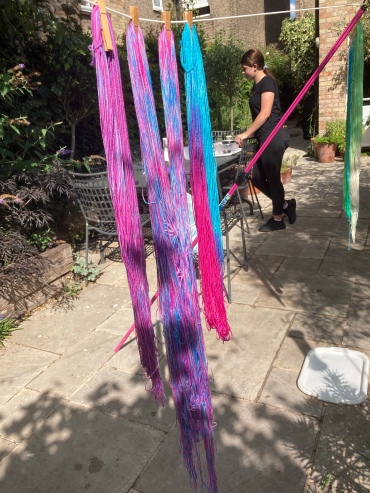 As you can see, we had a little bit of trouble with tangling yarn, but it’s mostly been straightened out now it’s dry, and I’ll be able to untangle fully when I wind it into balls 😀

Once it was dry (several hours outside for the mini skeins, but the big skeins needed some time in the airing cupboard as well), I rewound it into skeins. 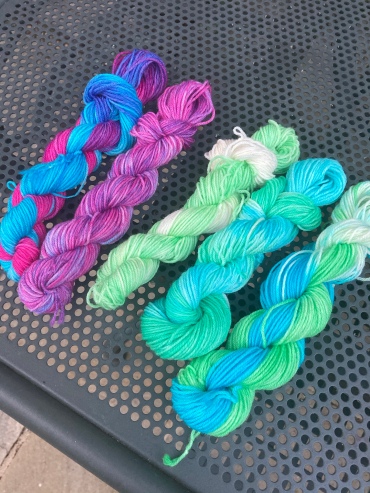 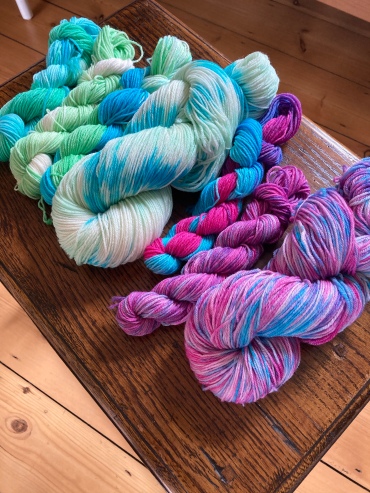 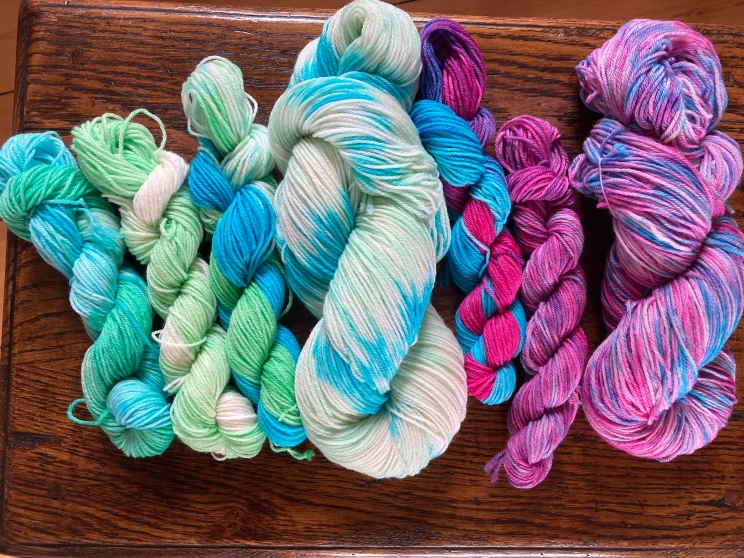 The green in my big skein was quite faded – I should have added more dye to the liquid – but I actually like how I’ve got a couple of skeins with very strong green, and then it all fades a bit in the bigger one. I think it’ll look really interesting once it’s worked up. Young Friend was smarter and refreshed her dye colours earlier than I did, and her skeins are just popping with bright colours 😀 I especially love her big skein, where she got a really mottled effect.

I’ve promised to make her something with her yarn (since she doesn’t knit or crochet), so I’ve been looking at shawl patterns that can be worked up with ~600m of yarn. I’ll probably start that next time I need something more straightforward to work on than my Van Gogh freeform, which is taking shape but has been rather tricky recently! And I’ll probably do a shawl with my hand-dyed yarn, as well.

So I will definitely, definitely be doing more yarn dyeing experiments in the future 😀 it was a really fun afternoon, and it was really very easy – the trickiest bit was wrapping wet yarn in cling film!

One thought on “Adventures in yarn-dyeing”