She put her hands under the leaves and began to pull and push them aside. Thick as the ivy hung, it nearly all was a loose and swinging curtain, though some had crept over wood and iron. Mary’s heart began to thump and her hands to shake a little in her delight and excitement. The robin kept singing and twittering away and tilting his head on one side, as if he were as excited as she was. What was this under her hands which was square and made of iron and which her fingers found a hole in?

It was the lock of the door which had been closed ten years and she put her hand in her pocket, drew out the key and found it fitted the keyhole. She put the key in and turned it. It took two hands to do it, but it did turn.

Then she slipped through it, and shut it behind her, and stood with her back against it, looking about her and breathing quite fast with excitement, and wonder, and delight. She was standing inside the secret garden.

When I first had the idea for this blanket, I knew that the first thing I would need to do was re-read the book. Such a hardship!!

Re-read and highlighting accomplished, I ended up with a nice list of flowers. A good start.

I knew I couldn’t use all the flowers, so from my long list, I whittled it down to a smaller number. By and large, I went with flowers specifically mentioned as being in the secret garden (as opposed to on the moor or in Dickon’s garden). The only exception was the primroses; I just couldn’t resist those!

Next came layout and choosing colours. 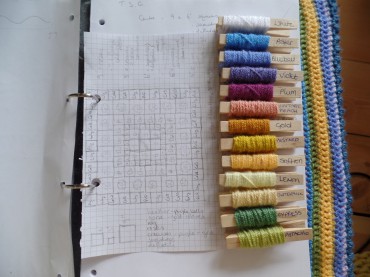 Colours for this one were pretty easy: I went with the flowers, most of which had colours specified in the novel. Yellows for primroses, crocuses, daffodils and roses. Blues for  delphiniums and columbines. Purples for crocuses and irises, white for snowdrops and lilies. Obviously I needed some greens in there as well, and I picked two that worked well with all of the other colours I chose. Thirteen colours in all.

The layout was a little trickier. I knew I wanted varying sizes of squares, and of course they had to all fit together well. Squared paper was essential. I started in the middle and worked my way out, with the layout/square sizes first, then initialling each flower into place.

In fact, one of the things I like most about the layout (the fact that it starts off with spring flowers in the centre, and moves outwards towards summer flowers) happened by accident. I didn’t deliberately aim to do it that way, but perhaps it was subconscious, because that’s certainly how it ended up.

Layout done, I counted up how many of each square I needed, and noted down out what colours belonged to what flower. I also made sure I marked down the date I began, because I like keeping track of things like that 🙂

When it comes to actually starting work on a pattern, I often sketch out some shapes to help me get a clearer idea in my mind of what it is I’m aiming to do. I don’t always do this, and I certainly don’t always stick to my sketch, but it can be really helpful, particularly in this case, where I needed each square to be very much recreating a flower in crochet, rather than just a more abstract floral form. I’ve done flower squares before, but rarely have I gone ‘right, snowdrops/daffodils/lilies/primroses, how do I get the sense and shape of that?’ in such a precise way. I wanted the squares to have not just the colours of the flowers, but the form of the flowers, as much as I possibly could. I wanted people to be able to look at the square and know what flower it represented. I wanted to keep the flower as vivid as possible.

So, there was some sketching out and some stitch ideas. I didn’t do this all at once, I did it square by square as I progressed and as I felt it was necessary: 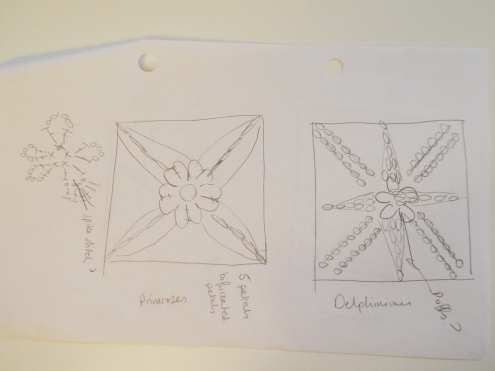 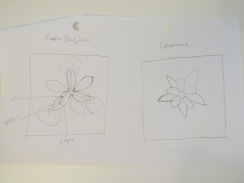 Sometimes I stuck pretty closely to my initial sketch, and sometimes I didn’t, but I found it helpful to map out the shapes of some of the flowers. Still, despite the sketches, some of these flowers were a real headache. I think I tried the delphiniums three times before finally getting something I was happy with!

I always like to work up my designs in a neutral colour first, monochrome, so I can concentrate on the stitches, the shape, and the structure. So out came my ‘silver’, which is what I habitually use for pattern-drafting, and I proceeded to hook up every one of my flower squares – all ten of them.

Then, and only then, did I begin in colour – and I’ll tell you all about that tomorrow!

The yarn packs are currently sold out (!!) but you can sign up to be notified by email when they come back in stock.

7 thoughts on “The journey – part one”