Last Thursday, I discovered I’d made a mistake in one of my squares. Then I discovered I’d made the same mistake in eighteen other squares. Nineteen squares out of twenty – the twenty 9″ squares for my latest blanket. I’ve been working them conveyor-belt style, all the rounds one, then all the rounds two, three, etc, and the mistake was all in round 12.

For most of the squares, that only meant ripping back and redoing one round, thankfully. For eight of the squares, it means ripping back two rounds – and, to make matters worse, I have been trying to be ‘good’ with this blanket and sew in ends pretty much as I go (after I complete each round, I sew in the previous round’s ends). And yes, on these eight squares, I had indeed already sewn the ends in. So I had to cut *weeps* and redo three rows as a consequence.

Needless to say, I was not happy. I estimated it’d take about fifteen hours of work to rip out all those rows and redo them all, and I think that was overly-pessimistic, but it certainly took me another three to four days to correct it all. That plus the work that had been ‘wasted’ because of the mistake meant that I lost probably 7-8 days worth’ of progress on this blanket. Ugggggggggh. Sooooo frustrated with myself. It was a stupid mistake, and it happened because I’m particularly fatigued at the moment, and so I spent all of those three to four days kicking myself for idiocy.

However, I have finally finished those squares entirely. Hallelujah!! And I’ve done it in 30C heat, today – even more of a triumph 😀

And I’m feeling so happy about it that I’m going to let you all have a little peek at the square. 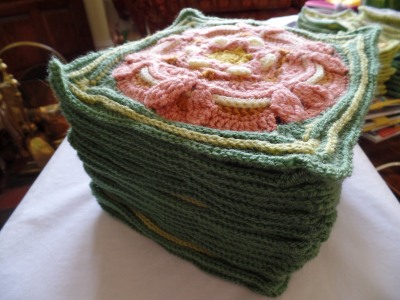 Onwards and upwards! I still have a way to go with this blanket, but I can already tell it’s going to be one of my all-time favourites.

14 thoughts on “If mountains were easy to climb…”